2017 was a turbulent year in Prince Edward County for single-family homes worth $300,000 and up. The County market heated up and then cooled off in tandem with the Toronto market, ultimately bringing good news for buyers. However, things were different for homes under $300,000 where monthly sales continued a downward trend over the year. Given the distinct dynamics for each market, this report will focus on homes under $300,000 while a separate report is devoted to the market for homes above that figure.

Historically, homes under $300,000 (also referred to loosely in this report as affordable homes) were typically purchased by local buyers, with trends influenced more by local economic developments than by happenings in Toronto. However, in recent years the affordable housing segment has been increasingly affected by demand from Toronto. 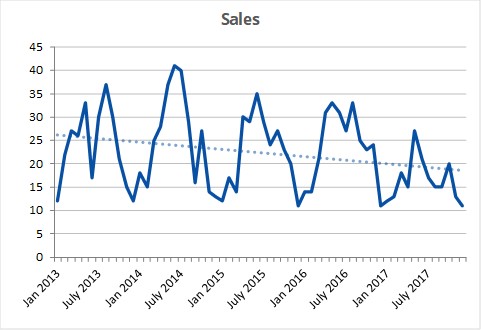 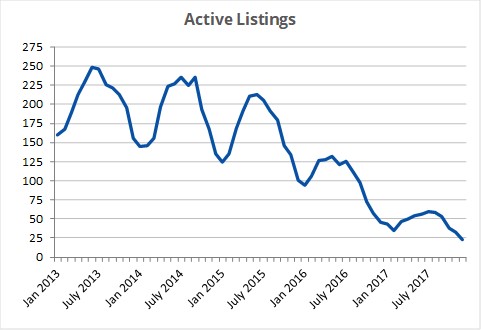 The graph (above) comparing active listings to sales on a common scale shows the dramatic change over the last 5 years. At the start there was a healthy ratio of listings to sales, reflecting a good selection available to buyers. With the dramatic fall in listings since then, we have reached the point where sales are limited by the lack of product, or in other words, there was little for buyers to choose from.

With constant demand and shrinking inventory, it’s expected that the bargaining power of sellers would increase and that there would be greater competition among buyers. The strong seller’s position would normally be reflected in an increasing closing-to-listing price ratio, meaning that sellers were able to get closer to asking price. 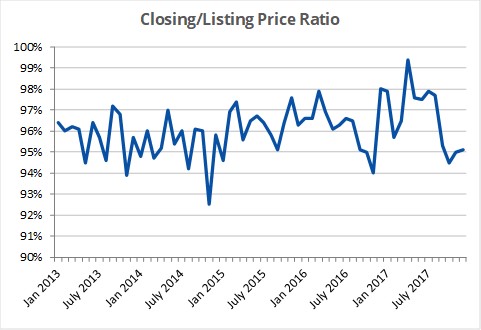 For County homes under $300,000, the closing-to-listing price ratio (above) began to increase starting in 2014 and continuing through the first half of the 2017. (The ratio returned to the historical normal level of 95 to 96% during the last part of 2017, but it is too early to tell if this is a sustained impact of the Toronto slowdown or it’s just a typical seasonal variation.) 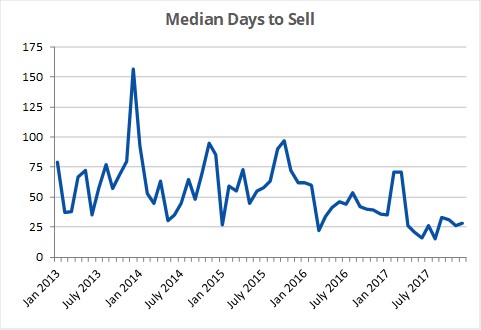 As expected, there was also a sustained decrease in the time needed to sell a property (above) which by December 2017 had fallen to one-third the time needed five years earlier.

The sustained shrinkage in the supply of affordable homes in the County was a result of several factors:

This sustained and continuing shrinkage in the market for affordable homes under $300,000 has implications at two levels: