Opinions differ, but many real estate authorities believe that the Toronto market is over-heated and is due for a correction. If that happens, what will happen to real estate in Prince Edward County? 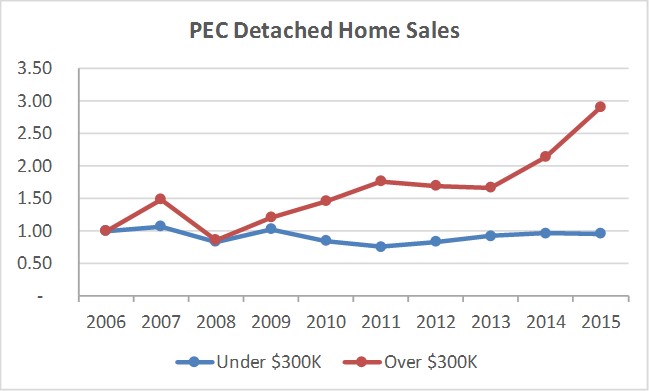 If and when such a correction does occur, there are two different forces at work which will pull the County market in different directions.

The first chart takes 2006 as a baseline and shows the relative number of home under and over $300,000 sold since then. While the number of home sold to local residents has remained nearly the same since 2006, the number of sold to Toronto buyers has increased nearly 3 times since 2006. This suggests that the County market has become more dependent on what’s happening in Toronto compared with a decade ago.

On the other hand, Toronto prices have increased so much compared to the County that even with a major fall in Toronto market prices, County homes will still offer great value.

The second chart shows average home prices for Toronto and the County taking 2006 as a baseline. In the last ten years the average price for a Toronto home has increased by 77%, while the average for County homes increased by 32%, less than half the Toronto rate.

Even if Toronto prices fall by 25% the way they did in the 1990 correction, County homes will still be better value for a Toronto buyer 10 years ago.

All this is not to say that Prince Edward County real estate markets won’t suffer major disruption from a major correct, but the effect will be moderated in the medium to long run by the attractiveness of County home prices.

If you’re buying a home, business or investment property and want facts not hype, contact me at treat@treathull.ca or 613-503-0027 to learn how you can succeed in today’s uncertain market.